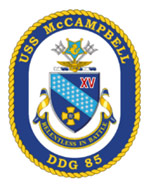 It isn’t often we see a new modern destroyer steam past in such elegance. She is the USS McCampbell, homported in Yokosuka, Japan and in this clip, headed up the Columbia River to Portland, Oregon for modernization. The shot is so great since we get to stand on the riverbank and see her steam right past. Note her dipped anchor is ready to let go which ships do when they’re in close quarters and may have to stop suddenly. Otherwise, they haul the anchor back in when the ship is safely moored.

These Arleigh Burke class destroyers are amazing. They have four LM 2500 gas turbines that provide 100,000 horsepower. Thus, they keep up with the fast carriers at thirty plus knots and up. See the spec sheet below. As of 2016, there were 62 of these destroyers in service. At last count, another 42 are planned, the largest class of ships since World War II.

My thanks to my USS Tingey (DD 539) shipmate, Jim Ferguson, for his great camerawork on the mighty Columbia thirty miles upriver on the Washington side and giving all of us a great look.