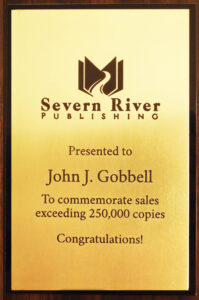 This came to me in latter August, 2022. I wasn’t expecting it. But then that’s how Andrew Watts, the CEO of Severn River Publishing, works. He likes to surprise people. And this was in the tradition of the U.S. Navy’s BRAVO ZULU (well done) flaghoist with Andrew tapping his background at the United States Naval Academy which is situated on the banks of the Severn River. He runs a great ship and it’s really nice to be part of it. JJG

And the Gold goes to…

On September 26, 2015, the Military Writers Society of America (MWSA) held their annual meeting where they voted on the top Military Fiction and Nonfiction authors, researchers and documentary producers. This year they awarded the Gold for Historical Fiction to John J Gobbell for EDGE OF VALOR. 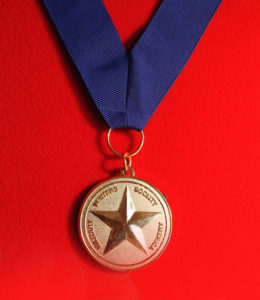 The Military Writers Society of America (MWSA) announced the award of the 2015 Gold Medal – Historical Fiction, to author John J. Gobbell at their annual meeting September 26, 2015 in Phoenix, Arizona. The award was for his latest novel, EDGE OF VALOR published by the United States Naval Institute Press.

Gobbell commented, “Hat’s off to the Military Writer’s Society of America and all the great work they do keeping alive the military spirit of America’s men and women in uniform, past, present, and future, and for maintaining their customs, tradition and accomplishments.”

EDGE OF VALOR is the fifth novel in the Todd Ingram stand-alone series of historical thrillers about the U.S. Navy in World War II’s Pacific Theater. The series begins with THE LAST LIEUTENANT and the siege of Corregidor in 1942. Next was A CODE FOR TOMORROW with Ingram involved in the naval battles of Guadalcanal in latter 1942. With WHEN DUTY WHISPERS LOW, Ingram finds himself drawn into the naval battles in the upper Solomons and the 1943 shoot-down of Japanese Admiral Isorku Yamamoto. The fourth in the series, THE NEPTUNE STRATEGY, features Ingram as a destroyer skipper in mid-1944 when he’s captured by a Japanese submarine en-route to the German submarine pens in L’Orient, France.

EDGE OF VALOR Ingram back aboard destroyers at the Pacific War’s end when he learns, as so few have, that winning the peace is sometimes as precarious as winning the war. He’s drawn off his destroyer to help negotiate terms of the surrender agreement with Japanese emissaries in Manila with General Douglas MacArthur’s staff. Next, he’s sent to the Soviet Union’s newest conquest, Sakhalin Island, just twenty miles north of Japan’s home islands where he sees first-hand the build-up of Generalissimo Josef Stalin’s massive military force fully intending to attack Hokkaido. After that, Ingram is a proud witness to the September 2, 1945 Surrender Ceremony aboard the USS Missouri (BB 63). Here, he realizes it was not just a military victory that won the war but a major diplomatic success that cemented the peace.

Said Gobbell, “THE EDGE OF VALOR is not just a work of fiction glamorizing war. It’s a factual account of what went on during the period from the cease fire up to the surrender ceremony and how the allies kept a steady hand while many Japanese military and diplomatic leaders committed suicide or in the extreme, revolted and tried to assassinate Emperor Hirohito. This was made all the more complicated by the Soviet Union, previously neutral to the Japanese during the war, attacking Japanese troops in China on the day of the Nagasaki bomb. This was a precursor by Stalin to grab territory of Japan’s Home Islands. For these reasons, EDGE OF VALOR should be a strong educational reference for not only history buffs but for youngsters who know little of the period.”